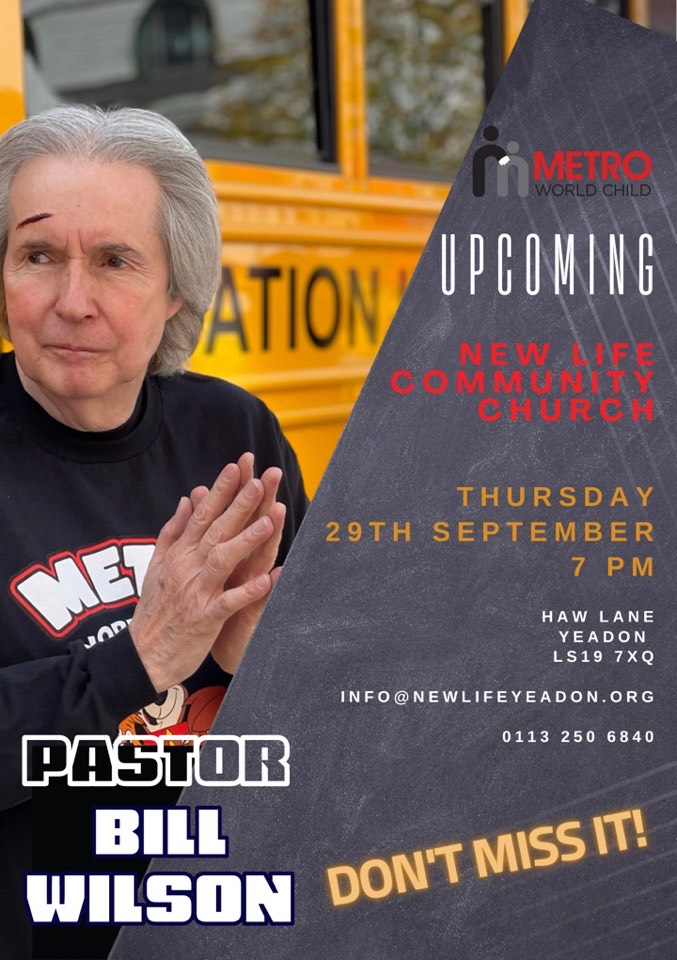 We have the Privilege of hosting Pastor Bill Wison from Metro World Child. The biggest Christian Childrens Sunday school in the world.

Abandoned on a street corner by his mother at the age of 12, young Bill sat and waited for her on that corner; he waited 3 days, but she never came back for him.  A Christian man who was on his way to see his son in the hospital stopped and asked him if he was ok.  Anybody could have stopped, but thankfully it was a Christian man who did.

After getting him some food, this man then paid for Bill to attend a Sunday School camp.  Never having heard the message of the Gospel before, that summer camp is where Bill first heard about Jesus.  Nobody would pray for him at the altar because of how badly he looked and smelled, so all alone he attempted his own prayer to God saying, “My mother doesn’t want me; the Christians don’t want me, but if you want me, here I am.”  That was the start of his own personal relationship with Jesus and his incredible walk with God.

Pastor Bill established Metro World Child, formerly Metro Ministries, in 1980 in Bushwick, Brooklyn, in what was one of New York’s toughest neighborhoods at the time.  It was most commonly known for its history of gang violence, crime, drugs, and poverty.  In the earlier years of his work, Pastor Bill was beaten, stabbed and even shot.  He, however, persevered and refused to leave the neighborhood; believing that the situation wasn’t hopeless, that the children and their families just didn’t have any hope.  He persisted in doing Sunday School programs and reaching children with the hope of Jesus, eventually expanding into all 5 boroughs of New York City and many other places around the world as well.

Today, Pastor Bill’s unique concepts of outreach and Sunday School programs, along with training courses and curriculum development, are now replicated globally.  He holds a Phd from the University of Wales and is the author of several books, including his bestselling autobiography, ‘Whose Child is This?’  He also travels extensively, frequently receiving invitations to churches, conferences, television programs and radio broadcasts.

Please could you let your friends know about this evening?